Amy is the RSPB’s Estate Manager for Fermanagh and South Tyrone. She heads up a team of seven who collectively manage the bird life on 43 of Lough Erne’s 154 islands along with 210 hectares of wetland and 400 hectares of forest.   Essentially the work is about habitat management and maintaining a variety of environments for the particular needs of particular birds.   Lapwings, also known as Plovers and Pee-wits, thrive in hay meadows. Curlews need longer grass in which to nest and hide their chicks. Sadly, their numbers are in steep decline due to habitat loss.   The RSPB owns a herd of Highland Cattle which it moves from island to island to graze and keep the vegetation short. Amy showed slides and played recordings of the calls of several species monitored by the RSPB including snipe, redshank, terns and gulls. RSPB in Fermanagh also manages 600 hectares on Cuilcagh Mountain, home to red grouse, skylarks and hen harriers.   Amy’s work brings her into daily contact with all sorts of wildlife including huge array of butterflies and moths. Her talk prompted many questions and much interest, for which she was warmly thanked by Eleanor Lyden

As is traditional in the meeting calendar for the Probus Club, a member of the local clergy is asked to bring to club members a reflection for the new year. On Thursday past, the speaker at the Ladies’ Probus meeting was Rev Jonathan Cowan, minister of Mountjoy & Drumlegagh Presbyterian Churches. He began by reminding members that, twenty years ago, we were anticipating the millennium bug and we were asked to reflect on just how accurate our projections for the new millennium had been.

Members were encouraged to LOOK BACK over, not just the past year, but over the previous decade or two and to think about the mixture of good and bad days which had been experienced. Everyone should have at least one good thing to remember and for which to be thankful. Above all, God’s goodness and faithfulness should not be forgotten. Next facet of reflection is to LOOK AROUND and be mindful that we are interdependent and to be thankful for all who help in any way; and then to ask ourselves “who could we help or befriend by showing love, support and compassion?” LOOK IN to our own lives and critically examine ourselves and those resolutions which are not often kept was the third aspect of reflection. The concept of “one-degree shifts” encouraged members to think about small changes which can make a big difference if continued. Psalm 121 encourages people to LOOK UP to the hills and also to God. So often people walk about with heads down and, in so doing, can miss what is all around and find complaints come more readily than thankfulness. Finally, members were encouraged to LOOK FORWARD to what the new year has to offer. CS Lewis, in Chronicles of Narnia number 7, reminds his readers that “… every chapter is better than the one before”. Life is to be viewed as an adventure and we should trust the unknown future to the all-knowing God. So encouraged, members should look forward to all that 2020 has to offer individuals and club members. The thanks of members were expressed by Mary Keane. The next meeting on 6th February will focus on security issues and scams.

Rotary President addresses Annual General Meeting
The AGM of the Club on Thursday 7th November in the Library was well attended. Mr John Robson, Rotary Club Liaison Officer, chaired the election of officers for 2020. The following were elected; President, Audrey Hodge, Vice-President, Margaret Cummings, Treasurer, Pamela McClelland, Assistant, Marjorie Greening, Secretary, Hazel Richards, Press Secretary, Anne McBain, Health and Safety Officer, Lisa Bullick and Pastoral Care, Cate McCrory and Margaret Scott.
The speaker was Mr John Bimson, President of Omagh Rotary Club, who took as his topic “A 50 year journey though houses we have lived in”. John gave a fascinating insight into “his journey”, from infancy in Newport, Monmouthshire, to childhood years in Yorkshire, to University life in Liverpool and to Northern Ireland where he met his wife Joan. Together they moved to Chorley, near Preston to a property built in the 1860’s with ample space for his love of gardening and being outdoors.
Their most life-changing move was to Wellfield House, Berwickshire, in the Scottish Borders. The property dated from 1750 and had been remodelled in 1904. Following extensive renovations John and Joan were approached by the tourist board in nearby Kelso to build on their love of entertaining and accept paying guests in their luxury country home. John vividly recalled many humorous stories from this time. Joan shared with the meeting letters of appreciation from visitors from all over the world. Judging by the comments, guests were very well entertained indeed, enjoying Edwardian Breakfasts lasting well into the day as well as large dinner parties.
Their present home in Newtownstewart is more restful but they continue to enjoy life to the full and continue to enjoy contributing to community life.

The members of Omagh & District Ladies’ Probus were honoured to have Liz Weir as their guest speaker at their October meeting on Thursday, 3rd October. Liz started off as Children’s Librarian in Belfast where she discovered the healing power of stories. She is now Storyteller in Residence for the city of Belfast. She is involved in a number of storytelling organisations including The Early Years Organisation, where she talks to children about racism, anti-bullying and respect for the elderly.

Liz works around the world and we were delighted that she took time out of her busy schedule, especially on National Poetry Day, to come to speak to us in Omagh. She entertained our members and also representatives from Dungannon Ladies’ Probus who were our guests on this occasion. |She spoke movingly about her work and the effect that it has had on children through more turbulent times in our history; and at the other extreme when she has been working with people with Alzheimers.

Lilian Collins expressed a vote of thanks to Liz on behalf of our members. Rae Gallagher, President of Dungannon, spoke to thank Omagh for their invitation to join them for the afternoon and to thank Liz for her witty and poignant tales.

Our group will have their AGM on November 7th. Our meetings are held at 2pm in Omagh Library and, if you are interested, please come along and join us. 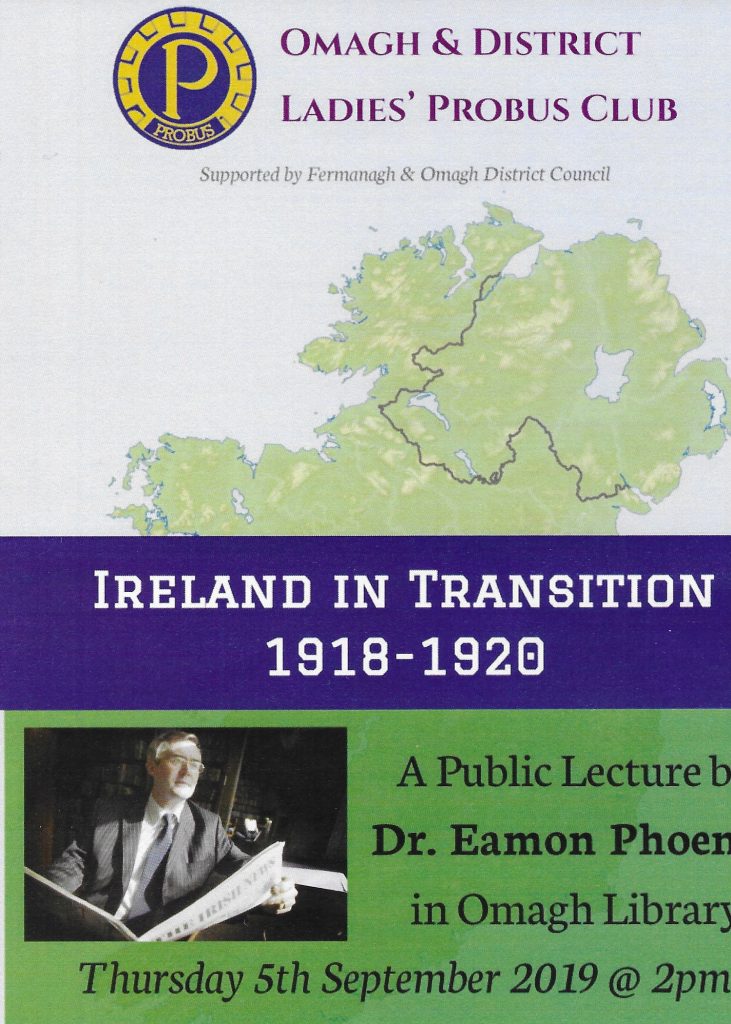 Our speaker for our May meeting was Audrey Hodge.  Audrey spoke on the topic of “Wit and Wisdom”.   She opened her entertaining talk with the quote that “inside every older person is a young person wondering what happened”   – a sentiment we all agreed with!  We agreed that as long as we were fit and healthy (and able to use our bus passes), all was well.

Audrey recommended a few things to help us to stay well, including minimizing multi-tasking, exercising regularly, learning something new and taking the time to embrace boredom and look around you.  Amid laughter, she concluded by saying “Time is a great healer, but a poor beautician”

Zoe Reid spoke for us all when she thanked Audrey for her most enjoyable talk.

There will be no formal meeting in June as the club members are going on a trip to Whitehead.  Our next formal meeting will be held in Omagh Library on the first Thursday in September (5th).  On that occasion our guest speaker will be Dr Eamon Phoenix, political historian and broadcaster and former head of life-long learning at Stranmillis University College, Belfast.  This is an open meeting and we will be pleased to welcome anyone who is interested to that meeting.  Further details will be published before that meeting.

Omagh & District Ladies’ Probus had their monthly meeting on Thursday, 7 March in Omagh Library.  The guest speaker on this occasion was Dr Patrick Fitzgerald from the Mellon Centre for Migration Studies.

Dr Fitzgerald focused his talk on the power of illustration.  His interest in this began when he was organizing an exhibition called “Emigrants” in 1994 for the Ulster-American Folk Park which covered 2 centuries of emigration.  It formed the basis of the book he co-authored with Brian Lambkin:  “Migration in Irish History: 1607 – 2007”

Artists in the 18th century tended to focus their work on pastoral scenes as they worked for commission at that stage, so they tended to produce “pretty” scenes for their patrons.  It was not until 1800 that work depicting Irish emigration was produced, and we were shown a painting by John James Barralet, himself an immigrant to America, which showed people arriving in America.  The title of this painting was “Liberty welcoming the arrival of the Immigrants”.

Dr Fitzgerald then illustrated his talk on Irish emigration with paintings from a variety of artists, including Joseph Barbour+, Samuel Waugh, Elizabeth, Lady Butler, Jack Yeats and Sean Keating among others.

Lena Rutledge spoke on behalf of the members and thanked Dr Fitzgerald for his most interesting talk which kept everyone fascinated.

New members, or those who may just be interested in joining Omagh & District Ladies’ Probus would be welcome to attend our next meeting when our speaker will be Sir Bob Salisbury.   This meeting will be at 2pm on Thursday 4th April in Omagh Library.

History All Around Us

Omagh & District Ladies’ Probus had their monthly meeting on Thursday, 7 February in Omagh Library.  Their guest speaker was Frank Sweeney.  Frank is no stranger to Ladies’ Probus, having spoken on a prior visit about Street Art in Omagh.  His topic on this occasion was Historic Monuments and Sites in Tyrone.

He gave an illustrated and very interesting talk about local ancient sites in the local area.  These included Beaghmore Stone Circles, Dun Ruadh, the Creggandeveskey Court Tomb, Cregganconroe Burial Site, Aghascrebagh Ogham Stone and  Dunmisk Fort.  Even those of us who had visited some of these sites learned so much from Frank’s very entertaining and informative talk.

His talk provoked many questions from those in attendance.  On behalf of those present, Rosemary Clements thanked Frank for addressing the meeting and for his extremely interesting talk.

New members, or those who may just be interested in joining Omagh & District Ladies’ Probus would be welcome to attend our next meeting when our speaker will be Dr Patrick Fitzgerald who will be speaking on Emigration & Genealogy.  This meeting will be at 2pm on Thursday, 7th March in Omagh Library.