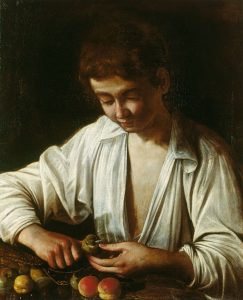 The speaker on Wednesday the 24th of November was club president Mr Michael Cooney, who gave an illustrated talk on the Post-Renaissance artist, Merisi Caravaggio. Caravaggio was born in Milan but moved to the town of Caravaggio in 1576. In 1584 he began his apprenticeship to a painter who was a pupil of the artist Titian. It was during this time that he adopted a style of simplicity and attention to detail which set him apart from the Renaissance Masters whose style was one of formality and grandeur.

Following his initial training in 1592 Caravaggio left Milan for Rome . The young artist arrived in Rome extremely needy without fixed address and without provision.  However his talent was such that he soon found work with the highly successful Guiseppe Cesari, the Pope’s favourite artist, painting flowers and fruit.

In Rome there was a demand for paintings to fill the many huge churches and palaces being built at that time. It was during this period that Caravaggio developed the style which was to become his hallmark. Known as chiaroscuro it is a style in which there is a shift from light to dark with little intermediate colour.  Michael illustrated his talk with images of some of the artists best known works, such as “The Beheading of John the Baptist”, “David with the Head of Goliath” and a “Boy peeling fruit”

Michael was thanked for an interesting and informative talk by Club Member Eamon Cunningham.