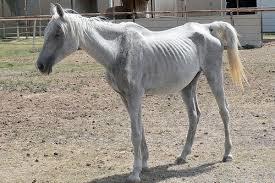 Clement Kennedy has been in local NI government for over 20 years and curently manages the Animal Welfare service in the Western region. With a budget of £1.1m his department is responsible for the welfare of non-farmed animals, with 9 Animal Welfare Officers to cover the whole area. The main offences are causing unnecessary suffering or failing welfare, with distressed horses being the most common cases. Between 2012 to 2016 a total of 21,773 calls had been dealt with, resulting in 57 prosecutions, 88 “disposals” (enforced moving to new home), and the serving of 756 improvement notices. On a lighter note Mr Kennedy appealed to all those who wish to contact the call center to ensure that their concerns are genuine, as it is common for reports of a “dead” horse in a field to turn out to be a healthy horse simply sleeping! Whilst horses are able to sleep standing up, they do like to have a good lie down sometimes! Newspaper reports were not always accurate, but recently they did have a case of 47 cats in a home where the owner had become sick. All the cats were successfully re-homed and the home owner herself was also helped. He was thanked for his talk by Probus member, Desmond Smart