“Waterways Ireland” is a North/South Body established under the British-Irish Agreement Act 1999. Based in Enniskillen it has imposing Headquarters on the shores of Lough Erne.   Its remit is the management, maintenance, development and restoration of the inland navigable waterway systems throughout Ireland.   15% of its annual budget of €25m comes for Stormont and 85% from Dublin, the division reflecting the distribution of waterways in each jurisdiction.   There are 7 major navigation systems in Ireland – Barrow River, Erne System, Grand Canal from Dublin to Limerick, Royal Canal from Dublin to the Shannon, the Shannon itself and the Shannon-Erne Waterway. In total Waterways Ireland manages 1000 km of navigable waterway, 429 km of towpath, 175 locks, 1200 heritage structures and 13,900 m of moorings. Developed in the 18th century for the transport of goods, the waterways are now used mainly for recreational purposes, something which generates millions of Euro for the tourist industry.  The Cruise Hire Sector is worth some €65m per annum while events such as the European Wakeboard Championships on the Lower Bann added another €7.9m to the local economy.   Angling, walking, cycling, canoeing, camping and glamping add to the attractions as do visits to the many historic places of interest along the way.    Libby was thanked for a most interesting and informative talk by Probus President, Oliver Loughran.

Margaret’s trip to the Galapagos Islands required four flights – Belfast to London – London to Madrid – Madrid to Quito and Quito to the Galapagos. In Quito, capital of Ecuador, she was joined by her daughter Suzanne, son-in-law, Dom and seven-year-old, Imogen.   Together they spent some days sight-seeing in Quito before flying on to Santa Cruz in the Galapagos Islands. There they boarded a luxury yacht for a memorable cruise around the archipelago.  Although they form a cluster in the Pacific Ocean the islands differ significantly one from the other in terms of geography and wildlife; some are covered in lush tropical vegetation while others are barren.   This has given rise over millennia to the unique array of plants and animals, birds and marine life, which in 1835 inspired Charles Darwin to develop a theory about “The Origin of Species”.   Since the wildlife has evolved in isolation animals and birds show little fear in the presence of people and Margaret had many wonderful close-up photos of sea lions, marine iguanas, blue-footed boobies, albatross and penguins – to name but a few. Snorkelling with green turtles and close encounters with giant tortoises which can grow to 1.8 m and weight 400 kg were among the highlights of this extraordinary trip of a lifetime. She was warmly thanked for her talk by Probus Vice-President, Michael Cooney
Meeting of Wednesday 15 May 2019
Speaker: Mr Michael Stinson, Ulster Wildlife Trust. Topic: Red Squirrels

Michael began by explaining that he was nearing the end of a three-year project, sponsored by the Ulster Wildlife Trust, into the Northern Ireland’s red squirrel population.   Using camera traps four strongholds for red squirrels had been identified in the Province – The Northwest around Limavady, The Glens of Antrim, The Mourne Mountains and Fermanagh and West Tyrone.   Grey squirrels were introduced to Ireland in 1911 when six pairs were presented to a newly married couple in Co Longford as a wedding present.   Released into a walled garden they soon escaped, multiplied and are now common in the central and eastern counties of Ireland but less so in the west where forest habitats are replaced by bogland.   The impact of the” greys” on the “reds” has been a dramatic decline in the native species due to the greys more aggressive foraging behaviour and the fact that they carry a disease – squirrel pox – to which the reds have no immunity.   However in certain parts of Ulster the tide is turning.   Pine Martens, hunted to near extinction in the 18th and 19th centuries are now protected and making comeback.   Surveys have shown that as the population of Pine Martens grows the population of grey squirrels declines.   This in turn helps the reds which can co-exist with Pine Martens.   Michael was thanked for an informative and engaging talk by Probian Hugh Ward.

The talk opened with a challenge.   Could you provide First Aid in an emergency?   All present hesitated because they admitted they would be unsure what to do and fretted that they might do more harm than good and end up being sued.   Mrs Fitzpatrick assured her audience that everyone can do something and in the space of 50 minutes proved her point with a convincing demonstration in which she was supported by her two Red Cross colleagues, Rebecca Donnelly and Gary Nugent.   The first response to an emergency is to shout for help or dial 999.   If the patient is bleeding an article of clothing can be used to apply pressure to the wound.   The acronym F.A.S.T. is a good guide when called upon to help someone who has had a stroke – Face, Arms, Speech and Time – the most important thing being to get the person into hospital in the shortest TIME possible.   If someone has had a heart attack and stopped breathing it is essential to begin CPR right away. Geraldine demonstrated the correct technique on a mannequin before showing an attentive audience how to use a defibrillator.   Having taken many questions along the way she and her team were warmly thanked for an excellent talk by Probian Eamon Cunningham.

Meeting of Wednesday 24 April 2019: Speaker: Geraldine Keys from “Action on Hearing Loss”
Formerly known as the RNID “Action on Hearing Loss” is a charity which helps those with impaired hearing to access all amenities and services.   In Northern Ireland one person in six is affected; over 20,000 are profoundly deaf and the statistics are rising because people are living longer.   The Charity works with the Health Service by providing a Hearing Aid Users Support Service, which advises people on how to use, wear and maintain hearing aids.   An important part of the work is supporting people with Tinnitus, a condition for which there is no cure but ways of coping that make life easier.   Ms Keys regretted that too many persons wait too long before seeking help with hearing loss, one plausible reason being that hearing aids are not fashion accessories like glasses.   In a wide-ranging talk she explained that the main causes of hearing loss were age, illness, drugs, head injury, and regular exposure to loud noise: 50% of childhood deafness is inherited.   The effects of hearing loss on the individual are considerable and include depression, social isolation, frustration, anger, loss of confidence and difficulties communicating.  Her talk ended with a check list of symptoms which indicate impaired hearing and some useful tips on how those blessed with good hearing can communicate more sympathetically with those who struggle to hear what is going on in the world around them. Her talk generated many questions and a sincere vote of thanks from Probian Kenneth Collins.

Mr Clarke is the Admiral of Lough Erne Yacht Club located at Gublusk Bay, Killeadeas on the site where a squadron of Catilina Flying Boats was based during World War II. His talk embraced not just the history of the site, but the contribution made to the war effort by Catalinas in both the Atlantic and Pacific Theatres. Deigned and built in America the Catilina Flying boat was the most advanced aircraft of its type when war broke out in 1939. It was a true flying boat with the hull of a speed boat supporting a wing high above the fuselage to prevent water from being sucked into the engines. Catilinas were ideal for patrolling the Western Atlantic where in 1940 U-boats were harassing the allied mercantile fleet. Initially they operated from bases on the Solway Firth but once a secret deal had been done with the “Free State” that allowed them to overfly Donegal a squadron was posted to Lough Erne in 1941. Along with Sunderland Flying Boats operating out of Castle Archdale they helped win the Battle of the Atlantic and played a prominent role in tracking and sinking the Bismarck. In the far East they were successfully deployed in the Battle of Mid-way which re-established US naval supremacy in the Pacific following Pearl Harbour.   Michael was thanked for a thoroughly engaging talk by retired Naval Officer and club member, John Robson.

Meeting of Wednesday 10th April 2019: Inter-Club
On Wednesday 10th April Omagh Probus hosted its annual Inter-Club quiz. President Oliver Loughran welcomed teams for Cookstown, Dungannon, Derry, Enniskillen and Strabane as well as two teams from Omagh Ladies Probus and one from the Golf Club. Before competition got underway club members and visitors observed a minute’s silence in memory of Club Secretary, Gerry McGonigle, who had passed away suddenly on 30th March and who had played a major part in organising the Quiz. In all 15 teams took part and after 8 rounds of 8 questions each the winners of the James Eakin Shield were the players from the Golf Club. The Bert McCrory Cup for the best Omagh Team was once again awarded to Omagh Ladies. A raffle for prizes donated by members of Omagh Probus raised over £300.00, sufficient to pay for the refreshments which had been served to members and guests as they arrived. Thanks were expressed to question master, Joseph Cummings, and Desmond Smart and his team of scrutineers for marking the answers and keeping the score.

President, Oliver Loughran, with the team from Omagh Ladies Probus which won the Bert McCrory Cup 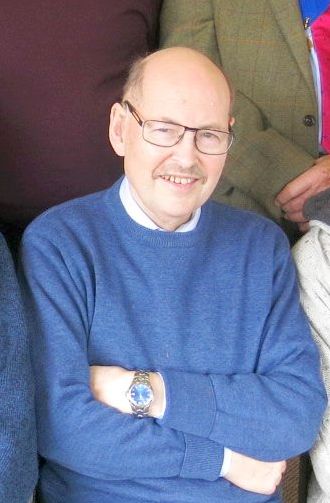 When members assembled in the Golf Club on Wednesday morning it was in the shadow of the sudden death of their esteemed Club Secretary, Gerry McGonigle, who had been laid to rest on Monday, 1st April. Probians were prominent in the large congregation which attended his funeral mass in the Sacred Heart Church and who formed a Guard of Honour outside the porch as Gerry’s coffin was carried to the hearse. The President began by thanking club members for their attendance before inviting all to stand in silent tribute to their departed colleague. In the half hour which followed member after member took the roving microphone to speak of their time with Gerry and share their personal memories of a lovely man. It was agreed that the tribute which had been written about Gerry for the local paper should be placed in the Club Archive. Read it here.

The second part of the meeting was devoted to finalising arrangements for the Annual Inter-Club Quiz and closed on an up-beat note when Eamon Cunningham proposed his friend Aidan Quinn for membership.

In keeping with the thinking that at least one meeting each month should be “Home-grown”, Vice-President, Michael Cooney, organised an In-House Quiz.   Having divided those present into groups of 4 or 5 he then challenged members with 10 rounds of tricky questions covering topics such as Art, Geography, Music, Holywood stars of yesterday year and General Knowledge.   In this he set the scene for the Inter-Club Quiz planned for Wednesday 10th April when 14 teams from Probus Clubs across Tyrone, Fermanagh and Londonderry will contest the James Eakin Cup in a tradition that goes back more years than most can remember. 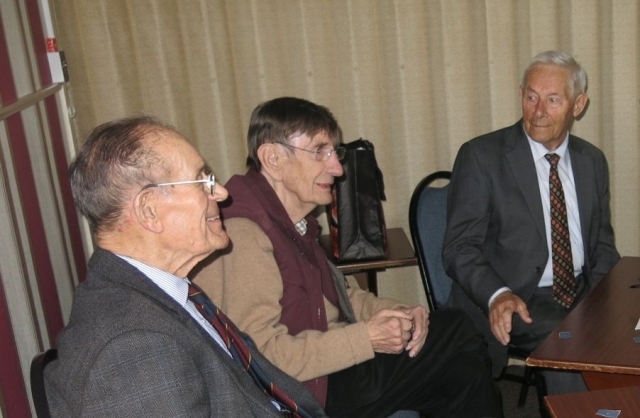 The President welcomed Mr Paddy McGrath from Omagh Leisure Centre where he routinely takes classes for Chair Exercises. Having re-arranged the seating to ensure everyone had enough space to fling their arms out he then led members in a half hour session of stretching, bending and twisting designed to improve fitness and well-being. It was the first such session in the club’s history but was so enjoyable that it may not be the last.